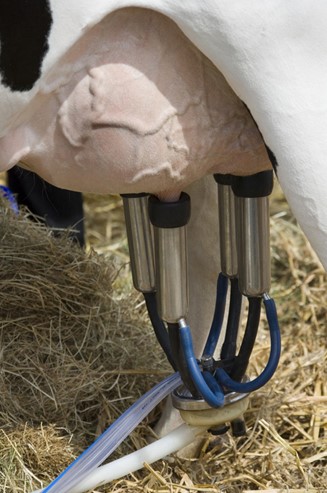 Parts of a Milking Machine

All milking systems regardless of the complexity contain these four major components;

Vacuum system - this system is made up of the vacuum pump, regulator and gauge. It's the system that ensures a vacuum is created and maintained at the test of the animal.

Cluster - this is the system that has the four teatcups which are attached to the four teats of the cow during milking.

Pulsator- the pulsator is a valve that ensures the liner opens and closes during milking for continuous flow of milk from the teats to the collecting vessel.

Receiver vessel - the receiver vessels have different capacities depending on the size of the milking machine. Besides collecting the milk, the vessels also help in separation of milk and air to aid in the flow. They are usually made of stainless steel and sometimes glass.

How does a Milking Machine Work?

The milking machine process occurs during what is known as a pulsation cycle. This cycle ensures a constant vacuum is applied to the end of the teat thereby forcing the milk out of the udder. The pulsation cycle mimicks the suckling or a calf.

During the pulsation cycle, two things happen - the pulsator opens forcing milk out and then closes for the teat to rest. It is this opening and closing of the pulsator that ensures a continuous vacuum is applied at the teat to remove milk from the udder and ensure it moves through then system without clogging.

This process is repeated causing milk to move out of the teats continuously to the collecting vessel.

A milking machine ensures efficiency during milking of animals which saves time and labour costs. Milking machines have also been shown to milk animals sufficiently which increases yeilds in the long run. Cows that are not milked completely reduce milk production eventually which is why proper milking with a machine can help increase of maintain yields.

Contact us today for more information about milking machines and how they can enhance production in your dairy farm.